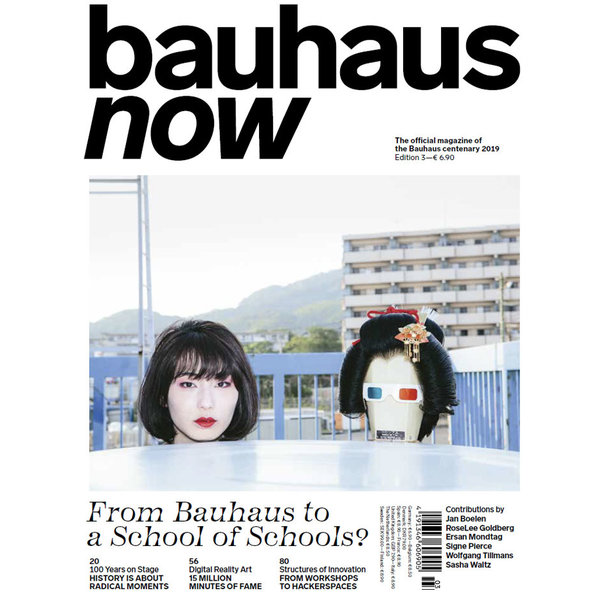 On 14th November 2018 the third issue of „bauhaus now“, the Bauhaus Association’s official magazine, has been released. This time the focus lies on the areas performance and education.

What are the big design tasks and problems in the 21st century? What are architects working on today? What are their dreams? What challenges do they face? And does the holistic approach of the Bauhaus still offer solutions for the future?

With the key areas performance and education, the third issue covers both the intangible as well as the tangible core of the Bauhaus – in the latter case, the iconic Bauhaus building in Dessau. Its revolutionary new teaching structure – including the Bauhaus stage as a place for exploring space and the human being – has shaped design and art education worldwide since one hundred years.

In this year’s Design Biennial in Istanbul, Jan Boelen and his curator team explore how the Bauhaus became a school of schools and what fresh stimuli the Bauhaus could offer today instead of blind veneration for its historic achievements.

On 100 pages, numerous prominent figures such as the founder of performa and Bauhaus expert RoseLee Goldberg, the choreographer Sasha Waltz, the digital performance artist Signe Pierce and the art lecturer Susan Orr engage with the questions which media, which forms of presentation and which content today still follow the Bauhaus idea, often without being aware of it or even claiming to do so.

The issue also covers: the 100 year bauhaus gallery with artistic answers from Stefano Pilati, Richard Siegal, Wolfgang Tillmans and the icon of Dionysian theatre, Richard Schechner. Moreover, the issue covers an intervention by the director Ersan Mondtag as well as a background discussion with the curator of the opening festival 100 years of bauhaus, Bettina Wagner-Bergelt.